The Anchors with James Knowles lead singer… Reuben Morgan, vocals, mandolin, and guitar… Angelina Morgan, bodhran, fiddle, and tin whistle… Anthony Brisband, percussion… and Mark Wood on bass. Pirate and Celtic music. They will be performing during the day in the courtyard of the Island Hotel and, Thursday night a the VIP Dinner, and Friday Night at the “Parlay with Pirates” Party.

Celtic Conundrum was formed on the idea of playing music as culturally diverse as the crew you would find on a ship, a dock, or a pub by the port. Songs from Ireland, Scotland, and England, and the great colonies of America and Australia.
Celtic Conundrum will be playing at the Parlay on Friday night and in the courtyard of the Island Hotel during the day on Saturday.
Listen to music on their website – www.celticconundrum.com 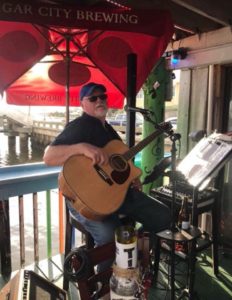 The Kerry Gordon Band will be playing their special blend of popular tunes that we all know by heart.  See them at the courtyard at the Island Hotel during the day Friday through Sunday.